4 No. 77m lengths of rail (2 rail roads) at Ennis Train Station were to be monitored during works associated with the construction of a new footbridge linking the southern ends of the 2 platforms.

Monitoring prisms were installed at 3-metre intervals as per Irish Rail document ‘CCE-TRK-SPN-010 Specification for Movement Monitoring of Railway Track and Digital Safety File Requirements’. Coping stones were also to be monitored at 2m centres over a length of 23m on each side.

The general arrangement of prisms was as per the layout in drawing WB7864-ENNIS. 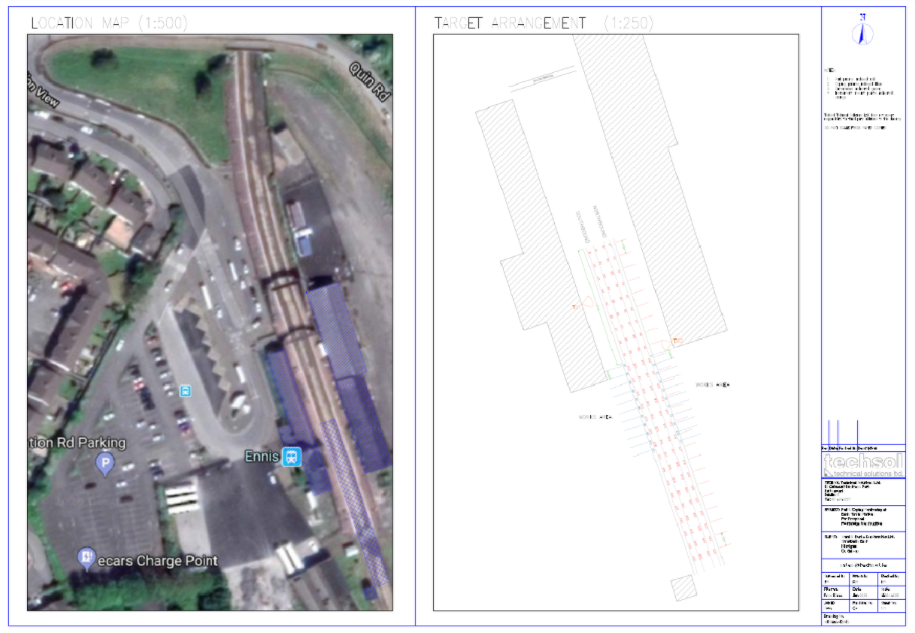 The prisms were installed at the required locations using a water-resistant bonding compound.

A number of prisms were installed remote from the works area, and out of reach of the general public, to be used as control points. The instruments referenced these prisms to orientate themselves before each observations pass.

Baseline Observations
In advance of regular monitoring commencing, a set of baseline observations were required to assess the track geometry, and also to provide a baseline to which subsequent sets of observations could be compared.

Driven by Trimble T4D, the instruments would orientate themselves by observing the control prisms prior to collecting each set of observations. It was intended that by running some code at the back end the target observations would automatically populate the Irish Rail monitoring spreadsheet calculating vertical movement, cant, short twist and long twist.
This would then be reviewed by the monitoring manager for spurious readings before being transmitted via email to the Employer’s representative and the other nominated recipients. An automated text alert would issue should any cells turn amber or red.
We expected that approximately 60 sets of observations would be collected automatically per 24hr period. The daily sheet would contain an average of all observations for that period.

During recent construction of a bridge for Irish Rail in Ennis, Techsol provided a Fully Automated Track Monitoring Service for us for a period of 11 weeks. The monitoring was set up with no issue and there was never any issue with dealing with Rob and his team.

Irish Rail’s feedback noted that the automated spreadsheet of information provided each morning for the duration of the monitoring was of a very high standard and complimented the service provided by Techsol.

This website uses cookies to improve your experience while you navigate through the website. Out of these cookies, the cookies that are categorized as necessary are stored on your browser as they are essential for the working of basic functionalities of the website. We also use third-party cookies that help us analyze and understand how you use this website. These cookies will be stored in your browser only with your consent. You also have the option to opt-out of these cookies. But opting out of some of these cookies may have an effect on your browsing experience.
Necessary Always Enabled
Necessary cookies are absolutely essential for the website to function properly. This category only includes cookies that ensures basic functionalities and security features of the website. These cookies do not store any personal information.
Non-necessary
Any cookies that may not be particularly necessary for the website to function and is used specifically to collect user personal data via analytics, ads, other embedded contents are termed as non-necessary cookies. It is mandatory to procure user consent prior to running these cookies on your website.
SAVE & ACCEPT